Books of Poems by

Neil’s recent two publications, Poems by an Old Codger and More Poems by an Old Codger, each containing over 60 poems, reflect on his life from WW2 to COVID-19, and are influenced in many ways by life growing up in a mining village during the war and later, family mining tragedies, and military life; together with his observations on modern life and our world now under threat from infection and climate change.

Neil has added a third booklet to his publications – LIFE UNDER COVID-19, 2020 – 2022; An Old Codgers collection of personal poems on COVID-19’s impact on his life under lockdown.

Proceeds from the sale of the booklet will go to the British Red Cross Ukraine Appeal.

“As I move through my four score years, I guess that my compatriots and I owe our children, our grandchildren and our great grandchildren a huge apology for allowing our world to become not as we found it when we came into this life.

We have poisoned the land, the seas, and the air. In so many ways we have reached for the stars whilst killing off our own star….”

Neil has been married to his wife Joy for over sixty years and they have four children, ten grandchildren and three great grandchildren.

A Chartered Engineer with a M. Sc. in Applied Psychology, Neil holds the rank of Squadron Leader, serving as an Education Officer in the Royal Air Force for 16 years. During his service career he was awarded the military symbol ‘d.f’ on completion of a Defence Fellowship at UWIST, Cardiff. He later held senior positions in both HE and FE.

From the age of 17, Neil was organist and choirmaster for over 30 years, wherever he resided, and for many years enjoyed male voice choral singing.

How to purchase the Old Codger's Books

You can purchase copies of the books by emailing [email protected] or pay online using PayPal.

Poems by an Old Codger 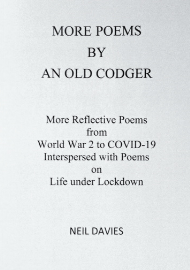 More Poems by an Old Codger 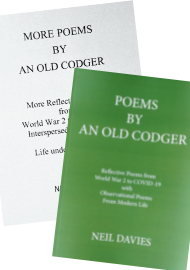 Recent musings from An Old Codger

In a desert place with dry flat sand,Redundant aircraft in a line they stand,Outdated, inefficient, too big, too small,Superfluous to the industry’s current call. I fear that there will be many, many, moreSurplus to airline fleets, left on the floor,Whilst this virus...

Increased concern over the introduction of electric vehicles.

Readers of my blogs will recall that, in February, I expressed concern over the introduction of electric cars. Charging at home, charging points to meet demand, who will be able to afford them, and pedestrians not aware of their presence. I have just experienced...

Old Nain Jones sits by her front room window,Her lace net curtains hanging still and low,Watching life on the street outside,With memories of when it was always cleaned with pride. Old Ted is out there still delivering coal,Once a fine young man, played in goal.Ah!...

Personal observed views on the NHS

Recently, as a result of my wife being admitted into A&E and thence onto an associated ward in our local hospital on a number of occasions over several months, having had her scan appointment to assist in achieving a diagnosis, cancelled several times, I made...

It was 1963 and I was one of the Education Officers at No 4 School of Technical Training, RAF Cosford, where two thousand Boy Entrants were under technical training and associated education programmes on a variety of engineering and allied courses.  It was...

CAN WE EVER ACHIEVE WORLD-WIDE ACTION?

There are many world-wide issues that can only be solved by total world-wide effort and action, but I fear that we may never see any of these tackled in unison and eradicated. One, of course, is the eradication of the current deadly virus, or protection from it, and...

WHAT A WONDERFUL WORLD?

That song, made popular by Louis Armstrong, paints a world of green trees, red roses, skies of blue, and friends shaking hands, but there is another world I am witnessing. A few days ago, late in the afternoon, I drove into the edge of town and parked up my car on a...

CAN WE EVER LIVE IN HARMONY?

We are an odd race, we come in different sizes and several skin colours.   We have developed separate mother tongues within each nation. We live nation alongside nation but not always in harmony. Many cannot even exist in harmony within their own population....

WISE AFTER THE EVENT

Here we are today hoping that the COVID-19 virus is now under control. We should not be surprised to have encountered this world-wide pandemic; expert have warned of such an outbreak occurring. When and what form of virus we would encounter, have been the...

BEST USE OF OUR WORLD-WIDE SCIENTIFIC KNOWLEDGE & SKILL ?

What an amazing scientific and engineering feat to send an unmanned vehicle through space and successfully land on Mars. If it continues according to plan, samples of the planet’s ‘soil’ will be gathered up and returned to NASAs laboratories for analysis. Here our...